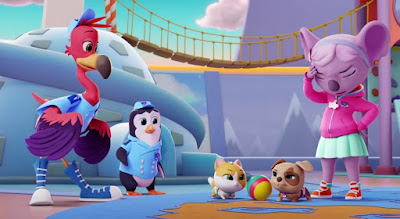 My grandkids love a Disney animated series called "TOTS" (info here, also photo source) about a fictional company that delivers baby animals via storks--or, in the case of the series' heroes, a flamingo and his penguin sidekick. Each episode tries to teach some message to the young viewers and one aired recently featured a puppy and kitten who were being delivered together to the same new (adoptive) mother. The two babies quarreled and fought over a ball, until the aforementioned heroes stepped-in to teach them that playing together (e.g., playing catch with the ball) was more fun than fighting over it.  [Spoiler Alert] Ultimately, the two were successfully delivered to their new family and everyone lived happily ever after.

Sadly, the lessons being taught to children by adult role models (in person and in the media) are more about how it's important to argue and fight over virtually anything. Researchers have pointed out for years that, in the absence of biases that are taught and/or instilled in their minds, children have a natural tendency to get along with each other. Perhaps it's time for the adults to start learning from the children that the best way to reach common ground is to find that ground and put aside the differences that keep us from getting there.
Posted by Mark Beck