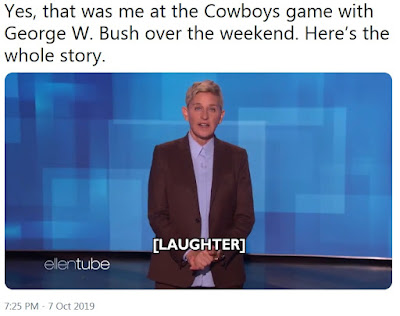 On her TV talk show, Ellen DeGeneres explained why she was hanging out with former President George W. Bush at a Dallas Cowboys football game.

Social media had not been kind to her.  Many had criticized her strongly for simply being friendly with the former president.

"When I say-- be kind to one another, I don't mean only the people that think the same way you do. I mean be kind to everyone. Doesn't matter."

(Link to the video and source of image.)